Why Maltese government has opted for show-only Covid-19 restrictions

Jay Gory
2020-10-26 03:46:30
comment article
Malta has fast changed from one of the model countries when it comes to dealing with Covid-19 to one of the worst ones. We won't tell you why – but here's a hint – stupidity. And now that the country is out of money, yet the coronavirus numbers are higher than ever, Maltese government established new restrictions, among which one is wearing the mask outdoors. This new restriction has now been in place for just over a week. Surprise-surprise, numbers haven't been affected by that at all.

Because fresh air is bad for you

Wearing a mask outdoors on an empty street - this measure has never been effective anywhere, just an annoyance to everyone. But as a show-only measure, we do care about showing people we're doing something, I guess it's fine. It's not supposed to work.

If more than 370 000 vehicles on an island of just over 300 square kilometers are not able to create enough pollution to kill people, what are the chances of three people on the same street giving each other Coronavirus?

"If you briefly pass a person shedding coronavirus in their breath, is that enough to get you sick? Probably not. A new preprint study (one not yet peer-reviewed) from experts at Colorado State University proposes a metric called Effective Rebreathed Volume (ERBV) that quantifies exposure. In every scenario modeled, outdoor ERBV was far less than it was indoors, except at distances of less than 1.6 feet. " (source)

Yet, in Malta, if you walk alone on the street without a mask, you are risking getting a 100 euro fine or the very minimum, the passing police car will stop and tell you to put your mask on. It's not a guess. It's from experience.

What outdoors masks tell people is just one thing – fresh air is bad for ya!

Because Corona doesn't spread when you're sitting down

According to a study in Japan, you are 18.7 times more likely to get infected indoors than outdoors. Yet, you can still go to cafeterias and bars in Malta, and do whatever the hell you want, sort of, as long as you're sitting down. Without a mask. Being outdoors, however, even alone, you need to wear a mask. Or risk a fine. 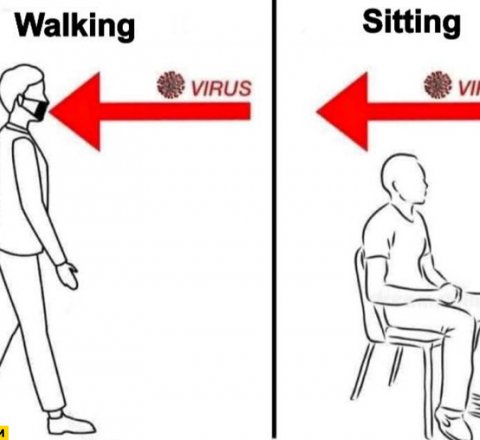 It's as if the government is saying that if you're together with 9 of your friends, sitting in a cafeteria, you're safe, but walking outdoors is so dangerous that you need to wear a mask.

"The science suggests that you probably don't need a face mask when going outdoors." (Forbes)

Because people are dumb

During the first days of the new rule I was having a cigarette on an empty street when an older lady wearing a mask passed me around 5 meters away. She stopped. And pointed to her nose. I didn't know what she was saying. Then she did it again. Ah, okay, the mask thing. And I pointed to my cigarette. She continued on her way.

With sensible restrictions it's good if people themselves try to keep others to follow the rules as well, but unfortunately many people do the same with no-sense laws and restrictions. You're on an empty street, why are you bothering me?

Because it's all make-believe: Make people feel safe while actually hurting them?

"Russell Blaylock, a retired Mississippi neurosurgeon who now does nutrition research and edits the Blaylock Wellness Report, has written that masks can affect intake of both oxygen and carbon dioxide as well as immune functioning. " (source)

Whether that's true or not, I don't know, as that idea is not necessarily accepted by everyone.

As I'm not here to to spread false information – wearing masks outside on an empty street is stupid, but potentially not harmful to you.

Because it's all about the show

Countries, not just Malta, are out of money and they think they can't afford a sensible, but short lockdown again. As they did in spring. So in Malta they came up with a clever way of doing something while really doing nothing at all.

So what would be the sensible thing?

Or make it sensible, make it logical - you need to wear a mask outside only if you're within 2 meters of someone. And in most places in Malta you can easily do that without having to take your mask off and put it on again every five seconds.

Of course, when it comes to real restrictions that actually might make a difference, there are many things that could be done. During the first wave in spring Malta made mainly right decisions. But today that's history.

The Azure Window has fallen

Want to enjoy some live music in Malta?

Look good for the next festa

Be careful with fruits and veg in Malta

New in Malta? There are "Couchsurfing" events every week

11 facts about Malta for your next holidays to Malta

Why Maltese government has opted for show-only Covid-19 restrictions

Academics land in Malta for a well deserved vacation